In Febuary we enjoyed the company of Carrie Fondi, and she spoke to the AQG group about the history of Hawaiian quilt making. She emphasized the difference between “traditional” Hawaiian quilts (solid contrasting colors, handwork, symmetrical pattern where 1/8 of the quilt repeats) and their “contemporary” offspring, which may include such taboo elements as black color (which is unlucky), animal or human subject matter, and more than one subject per quilt.

She mentioned that unlike in the rest of the United States, where quilt making is utilitarian, Hawaiian quilting began to document history, remember loved ones and celebrate family history. Another concept that is alien to Hawaiian traditional quilters was the idea of sharing a pattern. The only time a pattern might be shared with another person is when it was gifted to them, otherwise patterns stayed within families that created them.

The quilt making tradition began in Hawaii when the missionaries taught the Hawaiians to quilt in the 1820s. The Hawaiians thought the craft a “silly idea” as they at first couldn’t see the sense of taking a whole piece of fabric, cutting it up and sewing it back together. What a waste of time! The first Hawaiian quilt pattern was a breadfruit pattern, traced from the shadow of a breadfruit falling on a sheet outdoors, so the story goes.

The quilting evolved so that quilts were two solid, contrasting colors with “echo quilting” tracing a pattern in the center that represented a singular plant type growing from a central “root.” Echo quilting rippled out from the central pattern like waves in the water and became more popular in the 1900s.  Not many of the older quilts survive to show the changes over time as quilts were buried or burned with their creator. So much time had been spent on them that surely there must be some spirit of the person in the work.

Carrie showed us some of her “traditional” patterns in pink and green and then a variety of non-traditional changes she had made. Finally she showed us her contemporary quilts in batik colors and with human or animal rather than plant subjects.

See below for a quick show of Fondi’s work. Also included is the Show and Tell portion of our meeting. 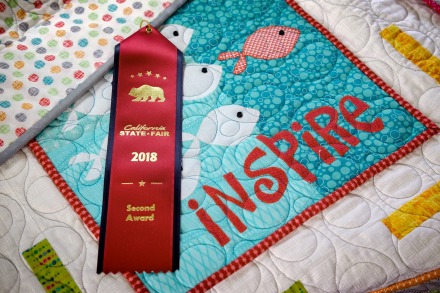 To date, in 2019, the Antelope Quilt Guild has made 132 quilts to be donated to local veterans, police departments, and a children receiving home.